Paint-less dent repair often gets a bad rap; many state that it does costly damage to the underside of the panel which is dented. This is said to cause corrosion, and as a result is typically avoided as a method of dent rectification. Conventional dent repair, on the other hand, has been the chosen method of dent repair by professionals for years. In an effort to clarify and break down the two methods to provide you with a clearer understanding of the facts as they apply to this topic we will discuss the two methods and cover a few examples of the myths regarding paint-less and traditional dent repair.
Paint-less Dent Repair
Here we will provide a visual example experiment to clear up the myths and provide proper education regarding paint-less dent repair. The following photograph shows the underside panel which has suffered three dents:

Photo of dents before repairs

Photo of dents after traditional and paint-less repairs 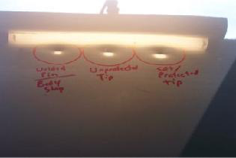 Above we see three dents; the left dent has been treated using conventional dent-repair methods. The two dents on the right have been treated using the paint-less dent repair methods. One of the two on the right were treated using a rubber-tipped implement, and the other using a metal-tipped tool. The conventionally repaired dent was actually treated using a newer form of technology which consists of copper ‘pins’ being welded to the outer portion of the dent itself. When the pins are given a good ‘yank’ the dents are ‘popped’ out, so to speak. This has traditionally been the common way of eliminating the dent, or at least sufficiently minimizing the appearance of it all together. The pin itself is then grinded down flush with the body’s surface, and an auto body filler is used to improve the damage done and amend the appearance of the damage done to body of the car. The panel is then flushed and painted to restore it to its original appearance.

Photo of the same dents after both methods of repair 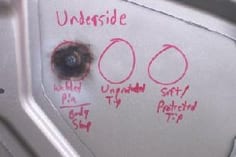 This photo enables us to see the cause and effect of traditional dent repair as opposed to paint-less dent repair. We can clearly see the traditional repair has left a fairly nasty burn on the underside of the treated dent. This is referred to as a ‘hot spot’. You see, body shops should apply an undercoat to the damage. It is really hit or miss when it comes to knowing how often this undercoat is actually applied, mostly because it can be difficult to see where the underside damage is actually located. Take notice of the other two paint-less repair examples: the damage is virtually unnoticeable, and the dents are repaired in an ideal manner.
In a nutshell, the myths surrounding traditional dent repair and paint-less repair are a combination of ignorance and stubborn old-school thinking. Newer ways of repairing dents, such as paint-less dent repair are much more effective and attractive, leaving your vehicle looking sharp and attractive without imposing further vehicle damage of any kind. Opt for the very best dent repair for your vehicle and settle for nothing less. You will be glad you did, and it will be worth it.

Customer Reviews:
(click an arrow below to stop / read)